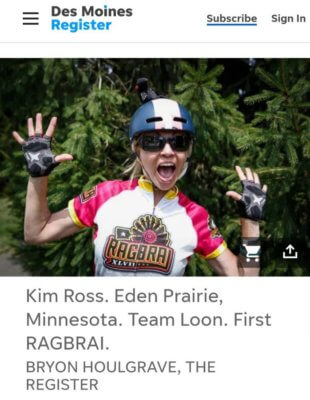 Brief video of a bit of the experience at campsite with thousands of other biker/campers:
https://youtu.be/tBRbMtobncI
Going off the grid for 8 days was never what I expected when I signed up for RAGBRA. However, when 30,000+ bike riders try to access their phone in small towns …well you give up when your phone is on permanent spin mode.
I have always wanted to go off the Facebook grid but find it impossible because it is the engine that runs my company. The most powerful thing I learned during RAGBRAI was to live in the moment without all the daily distractions.
It was a week with new beginnings. I learned to live without a REAL bathroom. I learned to take a shower in a portable shower in the middle of sea of people. It was that or stink!!I learned to use a PORTAPOTTY but will never, and I mean EVER get used to that one. ARG!!!   I learned that I can live without the best part of waking up “coffee in my cup” because coffee was at least 10 miles to first stop of the ride so you can imagine the line up for it!   I learned to live make up free (no vanities provided! What? I brought my make up!).   I learned that I could sleep in a tent. Ride 6 hours in non-stop rain. The list goes on & on.
I promised myself this was now off the bucket list. I was one and done when we hit our 75th mile on the most intense hills of the trip the final few miles on day 7. But, less than 24 hours late, I was planning our trip for next year. My husband is not quite on board yet…but, we just signed up for 62 mile ride on Sat with Tour De Tonka so I think it is all coming back to him again!
Go for it! Get something off your bucket list and then put it back on it again!
May God be your leader!
Kim Marie Ross, 3X3FIT Product & Program Developer

3X3FIT isn’t just another workout product.  It’s a new exercise method.  We believe in low impact and varying intensity workouts…but our goal is to strength, cardio and stretching exercises in a functional activity that is fun, easy and produces results.

3X3FIT started by Kim Marie Ross was designed for everyone from 18-80. The patented weighted rings combined with resist/assist tension cords produces an entirely new exercise method that anyone can do.